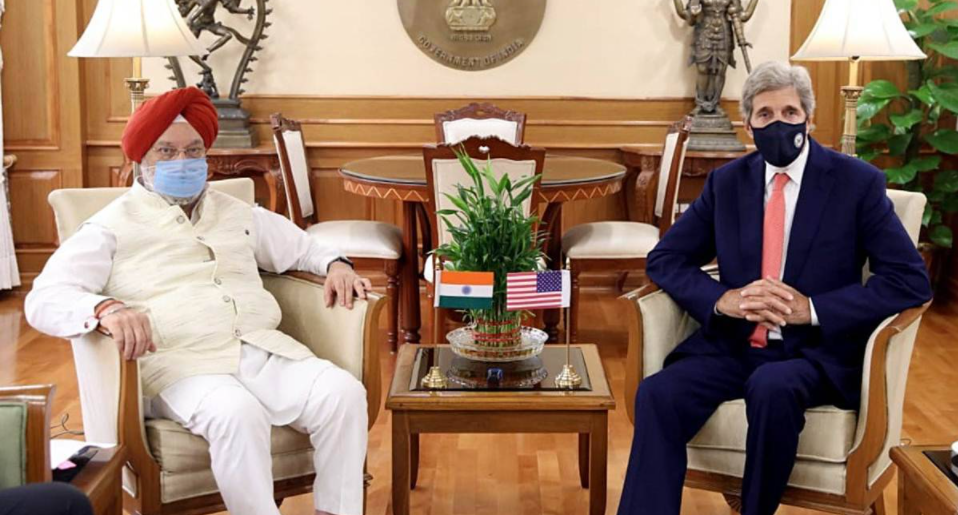 INTERNATIONAL DESK: US SPECIAL Presidential Envoy for Climate John Kerry on Tuesday said that while India has not made any commitment to raise ambition ahead of the COP26 conference in Glasgow later this year during his meetings with Indian ministers and officials, he expects the country to make an announcement “on one thing or the other” going into the climate conference.

“I have told them [Indian government], like I have many others, that this is urgent. While people have not said exclusively no or yes, they have said they’ll take a look at [raising ambition]. This is the Prime Minister’s prerogative and internal deliberations need to take place before India can take that position,” said Kerry, concluding his three-day visit to the country.

“I’m confident that India is going to announce one thing or another going into COP, as will many other nations we haven’t heard from yet. So, I anticipate increases of ambition from a lot of different places,’’ he said.

On Kerry’s last visit in April, he had spoken of the importance of NGOs in combating climate change. When asked about funding restrictions placed on NGOs by the government, Kerry said, “I did not have a chance to have a conversation on that partly because I was not aware of the full measure of that particular situation. It is the United States position, broadly, for any country in the world, that we think vibrant exchange in civil society is critical and contributes to processes.”

On his recent visit to China, Kerry said the two countries had “healthy and respectful exchanges” on various issues and “made some progress”.

“We did not agree on some components on how to address the climate crisis, but we have agreed to meet again and are in the process of setting the date for the next meeting. Since I was in China, President Biden and President Xi have had a telephonic conversation addressing a number of issues,” he said.

On his meeting in India, Kerry said, “We had agreement on all quarters on finance and technology cooperation.” He said discussions with the Indian government was focused on how India’s target of 450 GW renewable energy can be achieved, and what the US can do to assist in attaining it.

Kerry said the key for all countries is to raise ambitions and they need to make decisions on their power sector. “I’m not suggesting that everybody has to do the same things as developed countries. But everyone has to lay out a plan on what their energy sector is going to be and how it can be net zero in 2050,” he said, adding that India is already ahead of many other countries in its goals.

Talking about a shift from coal to clean energy, Kerry said a robust public policy should be brought to ensure the employment shift has minimum adverse impact.

“Nobody should diminish the potential impact of the shift from coal to another fuel source, but good public policy nobody should ensure that nobody is left behind with retraining for other jobs and alternatives. We have closed over 500 coal plants in America and will close another 58 coal plants this year in the coming year. We have announced that by 2035 we will have a zero carbon power sector in America. It has to happen because coal is the dirtiest fuel in the world,” he said.

“But it is not concessionary. It is money that will be invested in the transition and in the sector. But that is a very important investment, because we need to know that people will not be hanging back or be reluctant to try and find the projects that we rely on to get where we need to go. Our role is that we can help find some of the de-risking money through blended finance – through which you get a powerful accelerant, whether through renewable or whatever choice a nation makes on how its going to achieve low carbon fuel and power. One of the things we [US and India] will join together and work on is green hydrogen,” he said, adding that during his meetings with CEOs, one of the issues that was raised was de-risking of investments.

Kerry admitted that while limiting global warming to 1.5 degrees is a “tough target”, the US is on track to tackle through reducing emissions by 50-52 per cent over the coming decade.

“It is not easy, but it is doable. The IPCC report says a minimum of 45 per cent reduction. We’re reaching for more, as is Europe, which is at 55 per cent, UK is at over 70 per cent, Japan is at 50 per cent, Canada is at over 50 per cent – that’s 55 per cent of global GDP right there. And now if we can get India to come on board and other countries, then we are growing our capacity to combat 1.5 degrees. It’s not doable if countries do not come together,” he said. (The Indian Express)