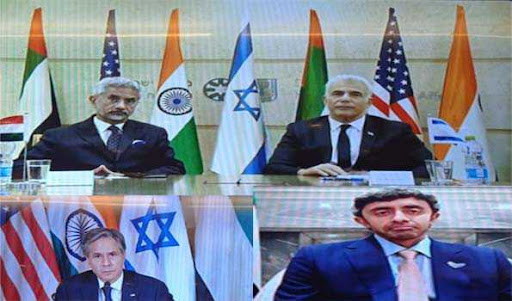 INTERNATIONAL DESK: In what could mark the emergence of a new Quad, India-USA-Israel-UAE in the first ever meeting of their foreign ministers have explored possibilities for joint infrastructure projects in the fields of transportation, technology, maritime security, economics and trade, as well as for additional joint projects.

Maritime security cooperation in the Western and Southern Indian Ocean Region amid China’s growing maritime ambitions and threats from piracy as well as sea-bound terrorism, measures to boost trade and create businesses through synergies among four nations in post pandemic world, climate change, renewable and non-renewable energy, besides steps to combat Covid-19 dominated the meet held in hybrid mode on Monday night coinciding with the visit of Foreign Minister S Jaishankar to Israel.

Israeli Minister of Foreign Affairs Yair Lapid, who initiated the meeting during his visit to Washington, said, “Around this virtual table – there is a unique set of capabilities, knowledge, and experience that can be used to create the network that we all want to see created.”

“I think the word we’re looking for here is synergy, because this is what we’re going to try and create starting with this meeting. Synergy that will help us work together on infrastructure, digital infrastructure, transport, maritime security and other things that preoccupy us all,” he said, adding, “The key to success is how quickly can we move from ‘government-to-government’ to ‘business-to-business’? How quickly can we turn this into a working process that will put boots on the ground, changing infrastructure around the world.”

Jaishankar said, “The three of you are among the closest relationships we have, if not the closest.” Jaishankar cited the fight against Covid-19 at a difficult time as an example of the benefits of such cooperative mechanisms where bilateral ties tend to fail.

“I think it is very clear that on the big issues of our times we all think very similarly and what would be helpful would be if we could agree on some practical things to work upon,” Jaishankar said.

It was decided that each minister will appoint senior-level professionals to a joint working group that will formulate options for cooperation in the areas of transportation, technology, maritime security, and economics and trade, officials informed.

The four countries plan to hold an in-person meeting of the ministers in the coming months at Expo 2020 in Dubai.

Jaishankar, was accompanied by Lapid, during the quadrilateral-level meeting on Monday, while US Secretary of State Antony Blinken and UAE Foreign Minister Sheikh Abdullah bin Zayed Al Nahyan participated virtually.

In his remarks, Blinken described Israel, the UAE and India as three of “our most strategic partners.” He said by “bringing friends together in new ways, we are making these partnerships even greater than the sum of their parts.”

“I think that is what this gathering is about. Sitting here in Washington, I can say very simply that with Israel, the UAE and India we have three of our most strategic partners. And given so many overlapping interests – energy, climate, trade, regional security – this seems like a really interesting and good idea to try and use this new format and very complementary capabilities in very many areas to just see many more things get done. That’s the idea,” Blinken said.

UAE’s Al Nahyan thanked Blinken and Lapid for “proposing the idea” of creating this kind of a forum to boost cooperation.

Referring to India, the UAE minister said, “Minister Jaishankar is an old friend, I could say, but also India and UAE have such a strong and diverse relationship.” Al Nahyan suggested businesses should be surprised by opportunities and then it should be observed how the trading community responds, in terms of putting a robust plan forward. (The Economic Times)