Ashik Rubaiyat: Sayera Begum (50 years old) has suffered high blood pressure and other associated problems in the last ten years. This may associate drinking excessive saline water. Saline water contains a high level of sodium chloride (salt). Poverty makes her life so miserable and she cannot afford to take proper treatment as well as medicine or buy fresh drinking water from the nearest Reverse Osmosis (RO) plant. She has no land to live and cultivate. She builds her house on the Khas land beside the bank of Pasur River. She lives only 2 km away from the Chalna Pourashava of Dakop Upazila. Dakop is situated in the Khulna district which is surrounded by many rivers. 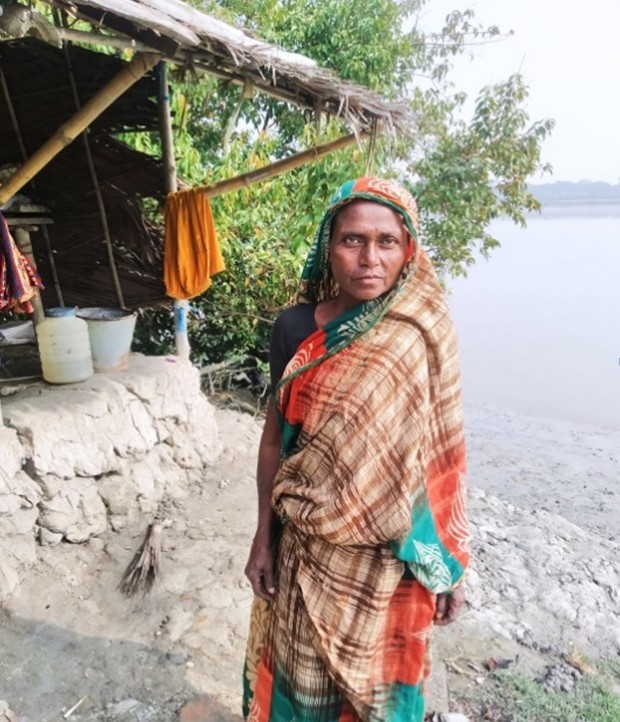 “I directly use the river water for washing and other purposes. Sometimes I put the water into the jar and wait some hours or days to make it clean. When the upper level of the jar water looks clear then I use it to cook and drink. The river water remains fresh half of the time of the year which is after the rainy season. The level of salinity in river water increased at the end of the winter season,” said Sayera Begum. She added that she is the only member of the family and lives from hand to mouth. She also said that her livelihood depends on the river. She has no capacity to manage or buy a water tank to harvest rainwater. She harvests a little amount of water in a plastic bottle and keeps it for the month of Ramadan. There are many people in the area who also drink the river and pond water directly. They are too poor to buy treated water from the RO plant. They will be able to drink fresh water if the Government or NGOs install the water sources, according to Sayera Begum.


There are a number of NGOs like Ad-din Foundation, World Vision Bangladesh, Rupantar, Heed Bangladesh, and Friendship, etc. working in the area to supply freshwater among the residents of the Upazila. The risk of affecting water diseases declines if residents drink fresh water. One of the private organizations named Jamjam runs the water business in the area. They sell water BDT 0.50 per liter in the shop. They also supply the water door to door. For this, they take double the rate from the customers.

One of the NGOs named Rupantar also works to provide pure drinking water in the area. They established a number of Pond Sand Filters (PSF) in the community and Rainwater harvesting systems in the educational institutes & community clinics. PSF is one of the cheap technologies that is used in the coastal area to reduce the drinking water crisis. Sand and brick chips are the main material used in the technology. It requires human effort to clean the filters and remove all the dirt by monthly. Many Scientists stated that both coliform and general bacteria can reduce by the PSF but may not remove 100% of the pathogen from contaminated surface water. Rainwater harvesting is the system to catch the rainwater through a tank or any other reservoir. Before entering into the tank, rainwater passes through the filter which is mainly made of sand and brick chips. In December 2016, Rupantar established RO in front of the Chalna Pourashava. After that, they hand over the RO ownership to the Pourashava authority. Consequently, ownership creates by this process and makes them accountable to the beneficiaries. “We sell the water BDT 0.40 per liter and also sell 7000-to-8000-liter water per day,” according to the RO caretaker. Their sufferings were known no bound before the RO, according to the group of local people. Most of the population depends on RO as a source of pure drinking water. In addition, many residents said that they get rid of saline water and this RO is a blessing for them but not for everyone.

Dakop is located in the southern part of Bangladesh where saline water is a part and parcel of their daily life. Coordination among different organizations like GO, NGOs, and the private sector are badly needed to provide fresh drinking water to the residents in saline-prone areas like Dakop. Otherwise, the miserable situation of the residents like Sayera Begum will remain the same in the long run.